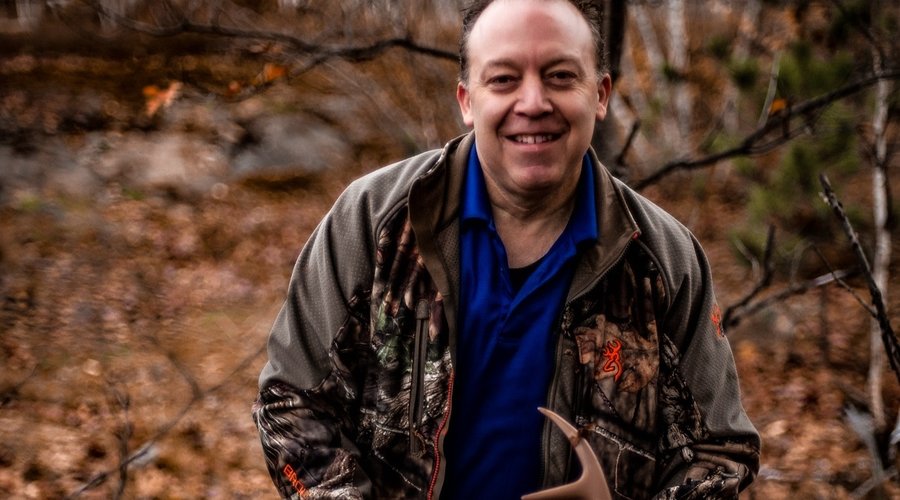 Scrapes, Scenes and Scents with Kevin 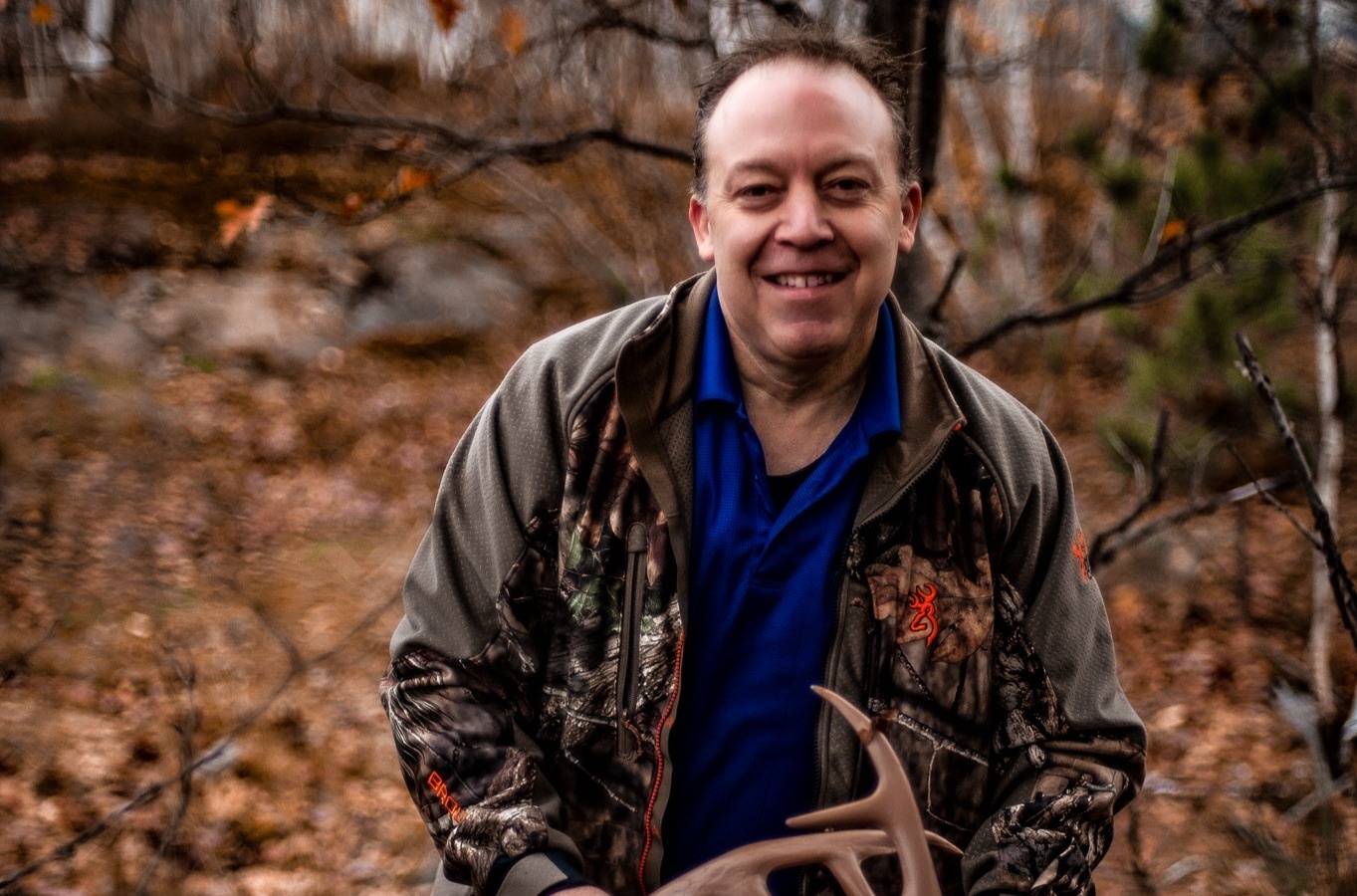 Kevin Kaksonen has worked behind the sports desk counter at Ramakko's for quite a few years. He's become one of the more familiar faces in the store.

Kevin has a reputation for being an extremely knowledgeable and passionate hunter. Having been hunting for most of his life, we figured Kevin must have some tips and tricks about attracting whitetail deer.

We chatted with Kevin as he set up a scrape and talked about scents, attractants and more.

How long have you been setting up at your location?

Do you use a firearm or a bow?

Firearm. I use a rifle mostly.

Using a rifle allows for a much longer shot, and multiple shots quickly. 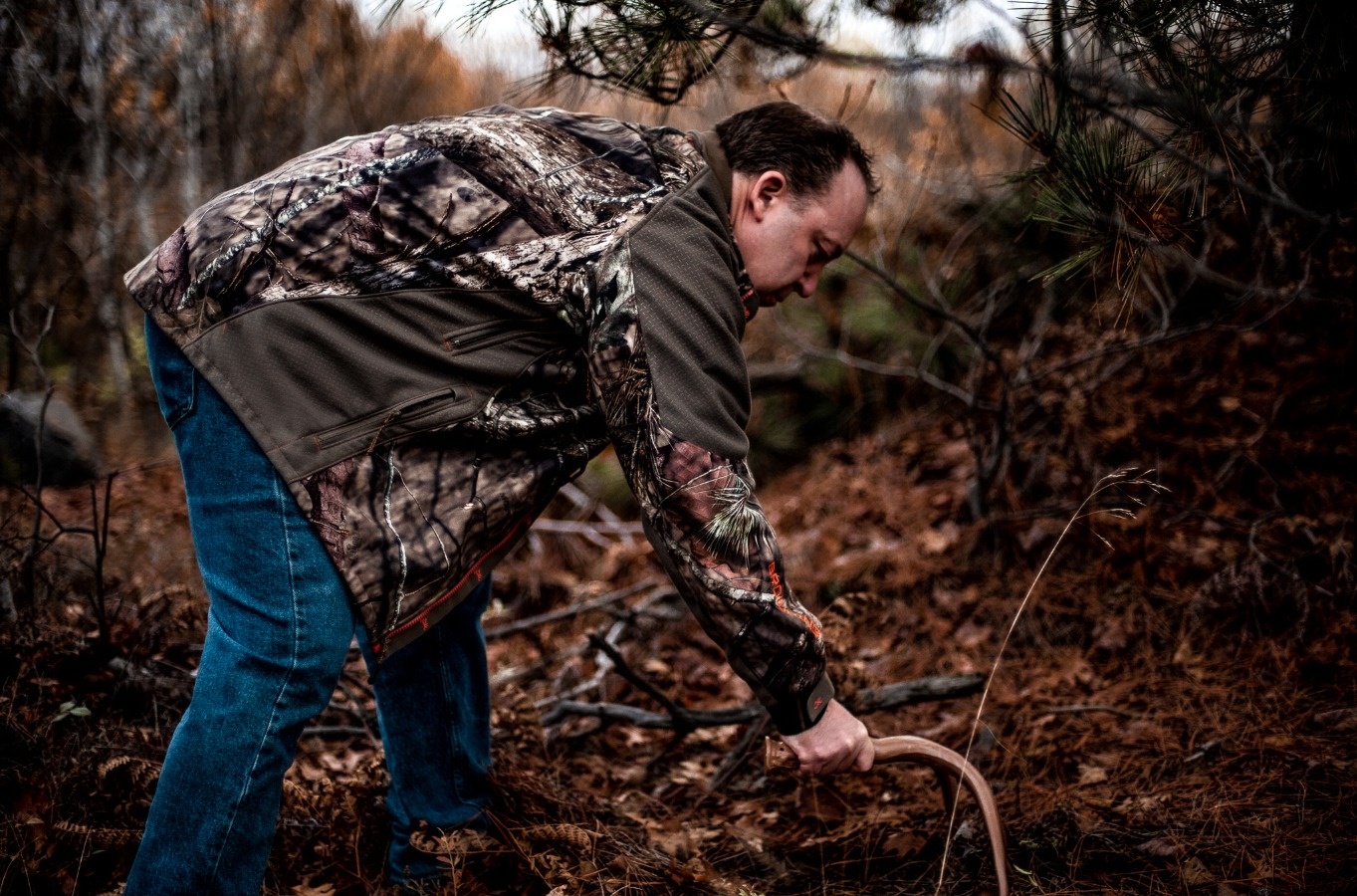 How many deer do you think have come through your spot?

Hundreds of pictures a week come through my trail cam of all sorts of animals at my location. 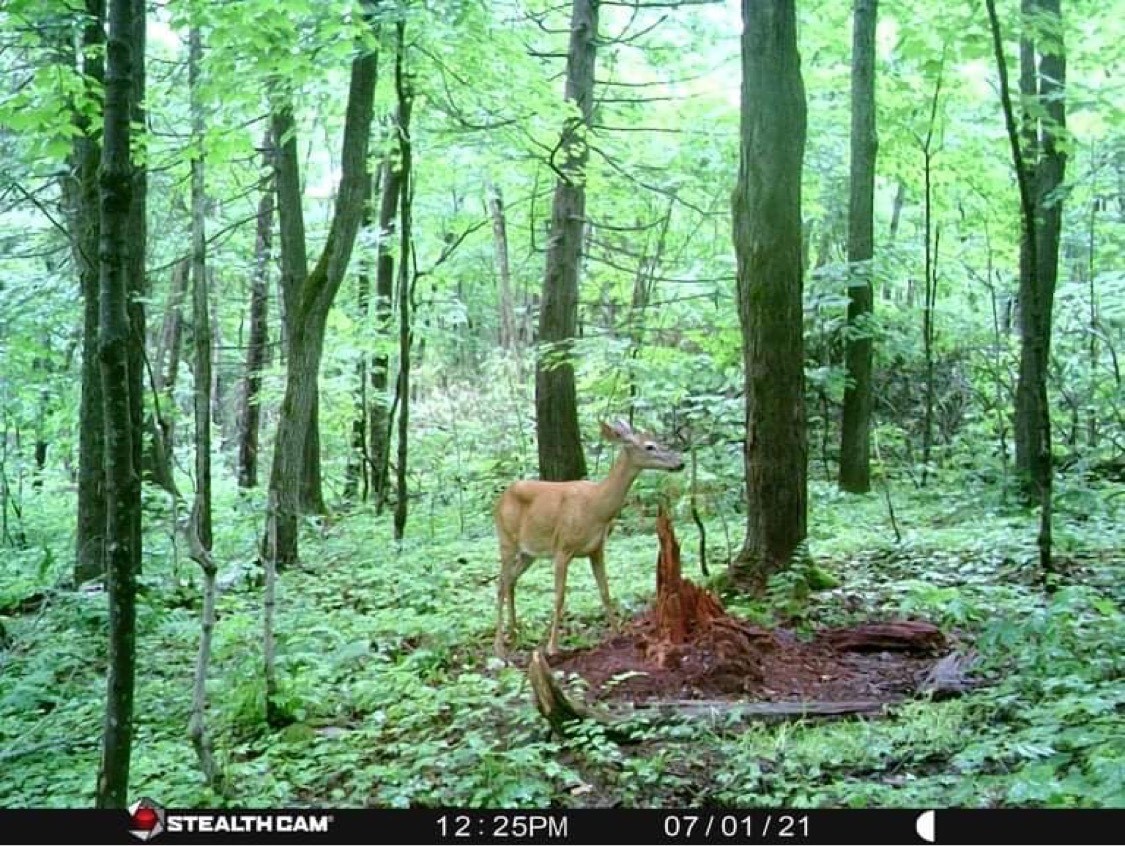 Have you caught any unexpected visitors at your location?

Actually this year I had sandhill cranes up in the bush, a pair of them. They were strutting and dancing around my stand, I’ve got lots of photos.

It scared the sh*t out of me, I’m in the bush, they aren’t supposed to be there! I’ve never seen one in the bush – just down south in the fields or on the Island this year. They’re big birds.

I was walking to my camera when all of a sudden there was squawking and I thought, what the hell was that?

At first I thought they were herons. They were there for about three weeks. 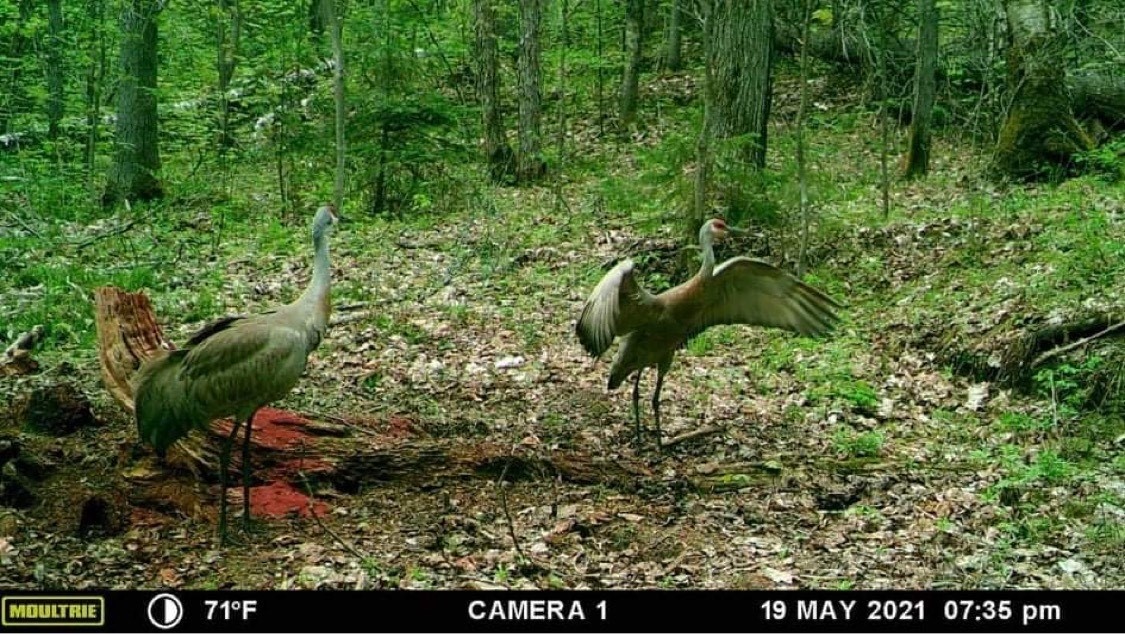 So around two weeks ago, we had a 50 pound bag of Rack Stacker in my parents' garage, and a wolf came into the garage and started eating out of the bag during the day.

The game cameras set up in the yard caught the thief. 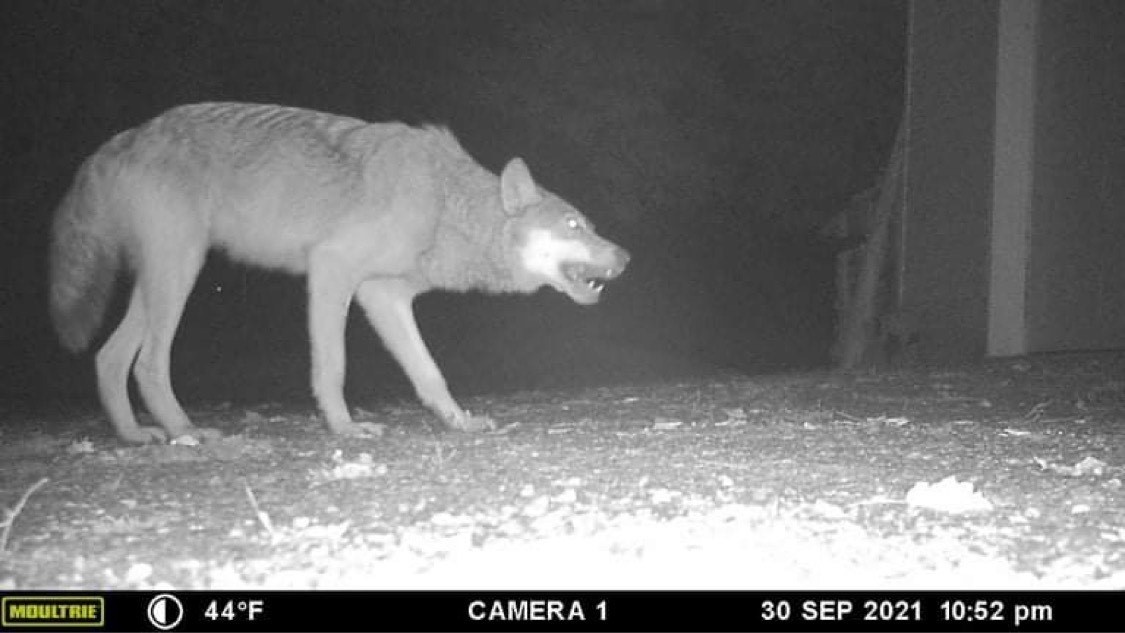 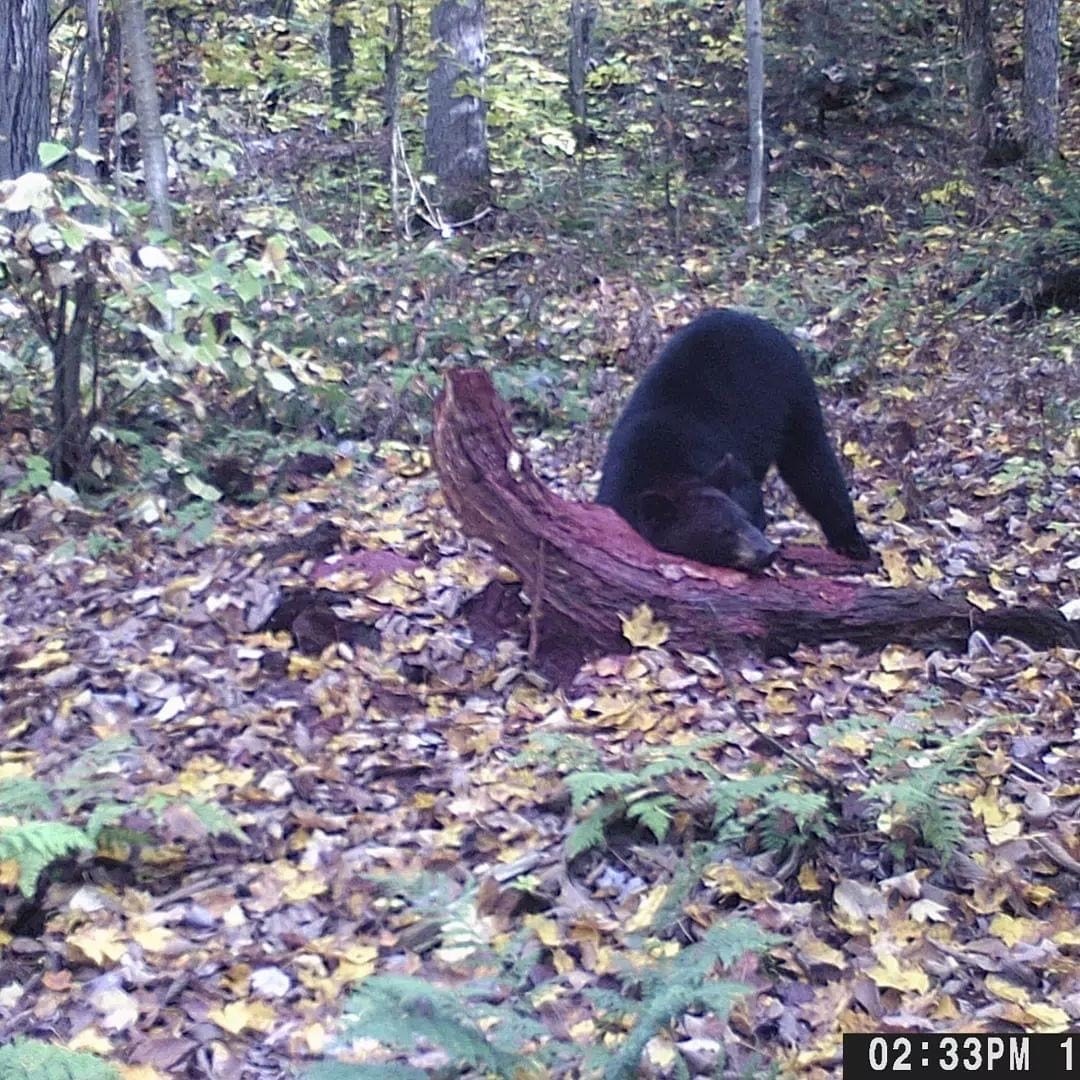 What is the best scent for whitetail deer hunting?

Tink’s #69 is my favorite. It’s been around for a long time and it is considered to be the originator. 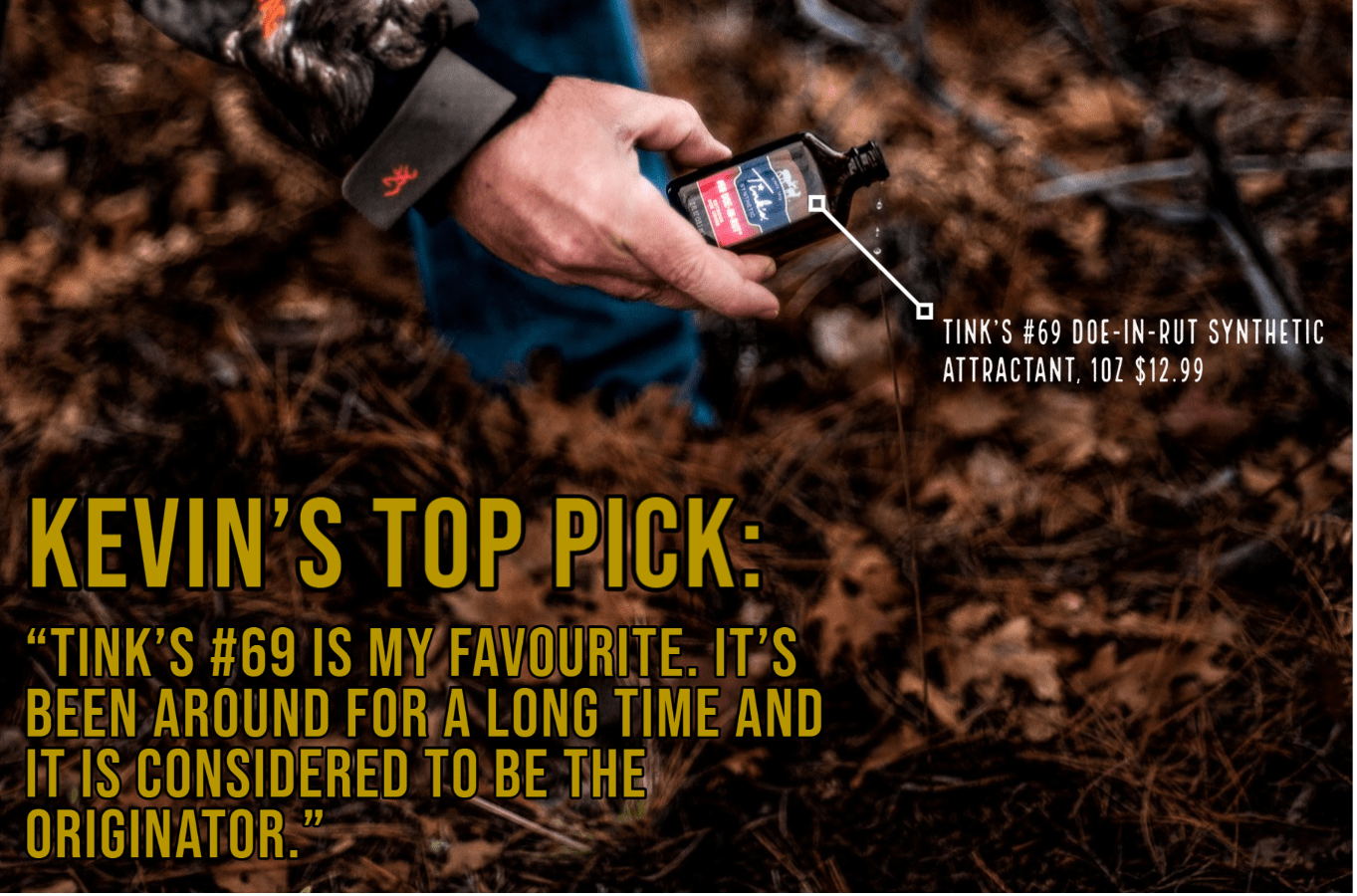 So they all have a place. The gels are great if you want to apply it to branches - it’s sticky, so it’ll stay there.

The Tinks hot shot mist, which almost comes out like a hair spray is carried in the wind, so if you’re up in your tree stand it will carry a long way.

Liquids are great for pouring into a scrape, or soaking a scent wick. 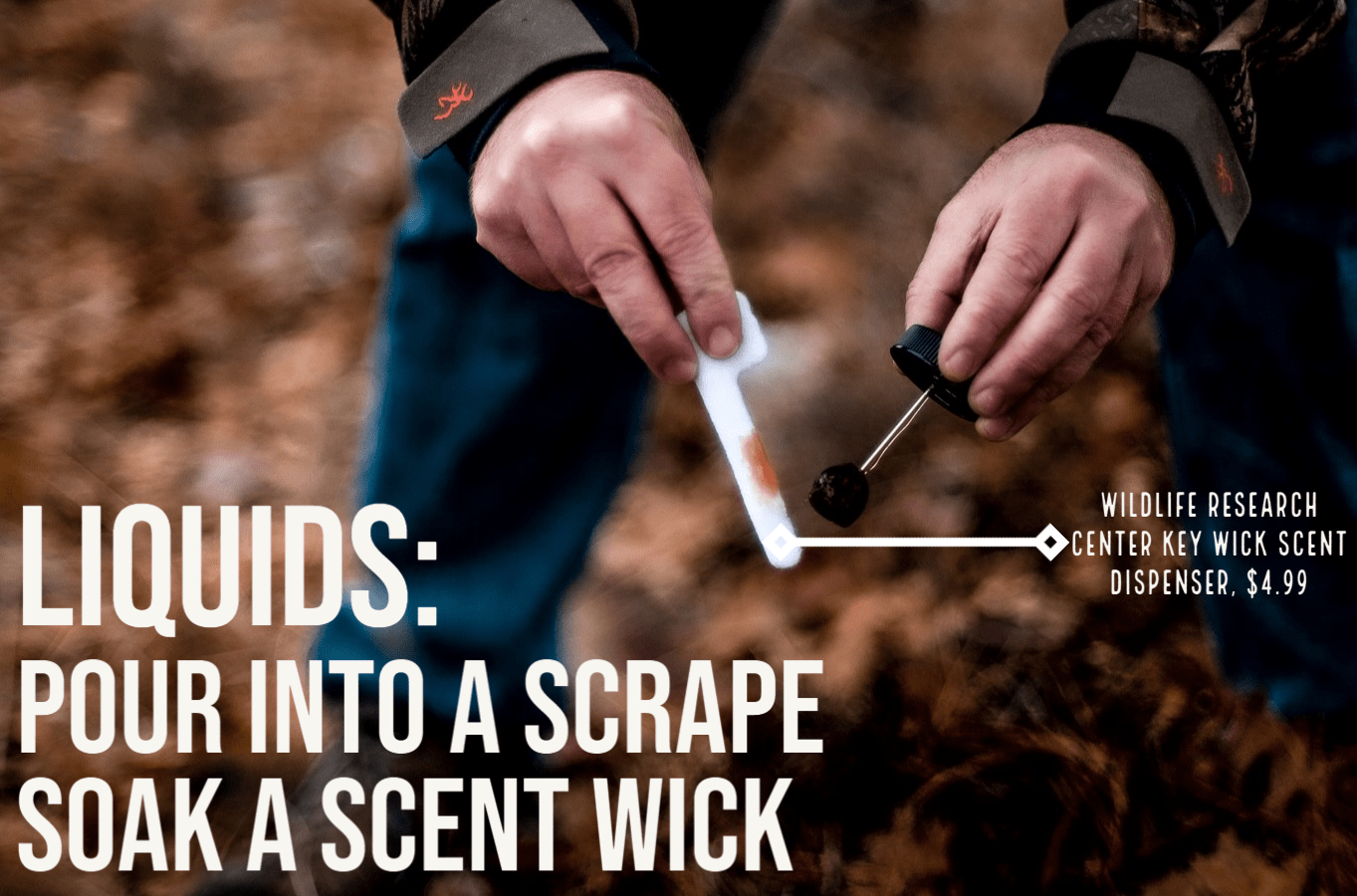 What’s the difference between synthetic and natural?

So the natural stuff comes from a deer farm, where they collect the urine. In certain provinces like in Ontario it not legal to use natural scents because there’s a fear of CWD disease, so we offer a synthetic version.

It’s made in a lab instead of harvesting actual deer urine. They smell the same, and last longer. 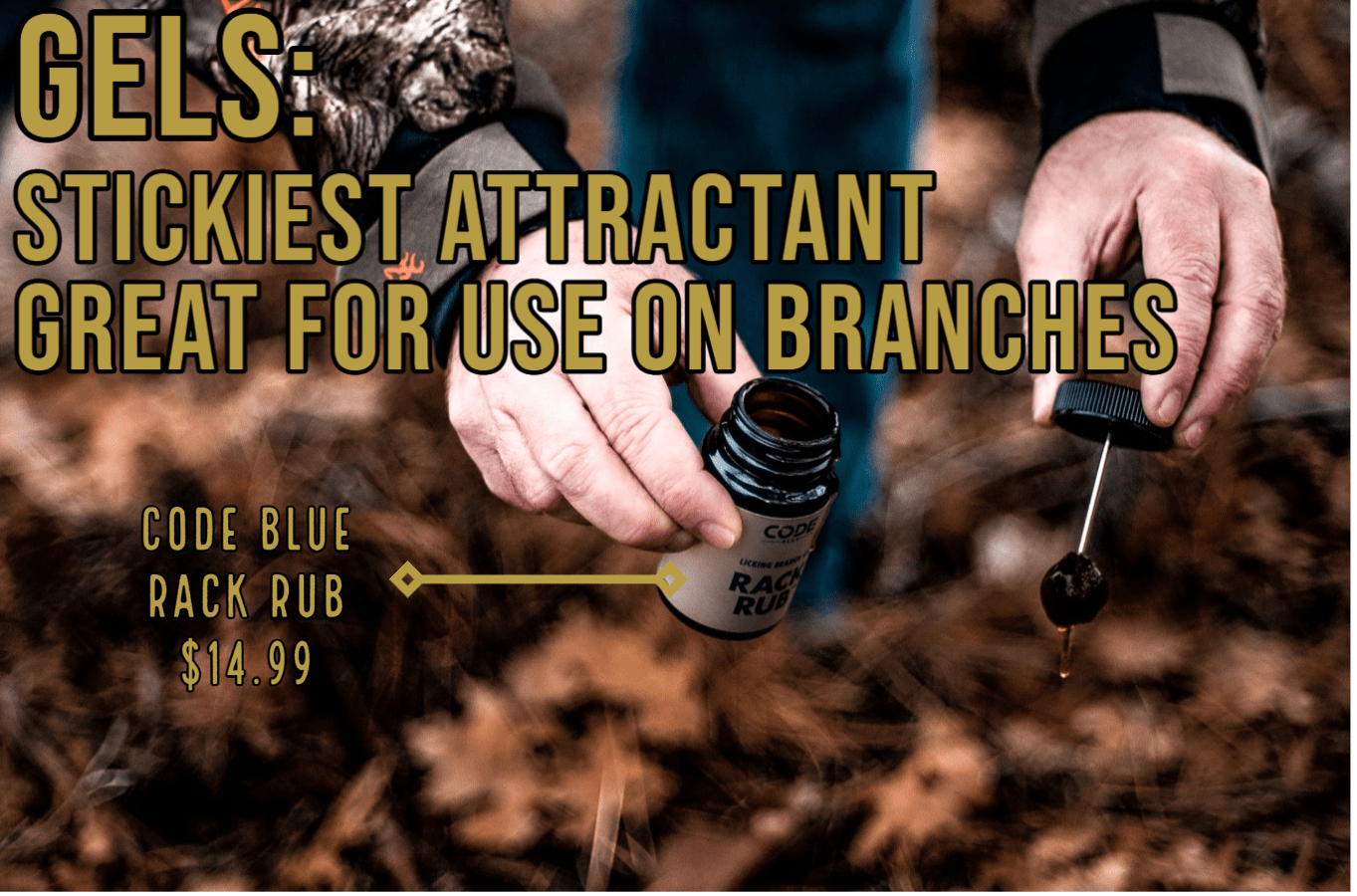 How about feed - out of all the different types of feed, which one do you think works the best for you?

Rack Stacker, for sure. They are a Canadian company from near Belleville. Steve Elmy came to see me about 12 years ago and he had this new product. He was originally from the pet industry, and he developed his own deer feed for himself on his property.

He knew how to do it, and he added a bunch of nutritional stuff. His buddies started trying it with great success. The rest is history as they say.

I start feeding in the spring, and there’s all kind of minerals in the product that does feeding there fawns need.  It adds nutritional benefits, as opposed to stuff that is basically pure salt.

How many bags of Rack Stacker do you go through in a year?

Is it better to have a scent and a feed in the same place?

Well, early season, you’re going to be feeding the deer, because they’re still actively feeding – especially the does with their fawns.

As it gets towards the rut which is approaching now, they forget all about eating and it’s all about chasing does and trying to breed. That’s where the scent comes in.

So we’ve looked at how to attract a deer with scent and feed. How about sound?

There’s calling. That’s a whole other chapter. That’s when you get into grunt calls, doe calls, rattle antlers to imitate bucks to draw other deer in. Out in the woods, that sounds loud.

The bucks come running. What happens is, especially with the younger deer, they know that sound is of two bucks fighting over a doe, so they’ll try and move in while they have the chance. 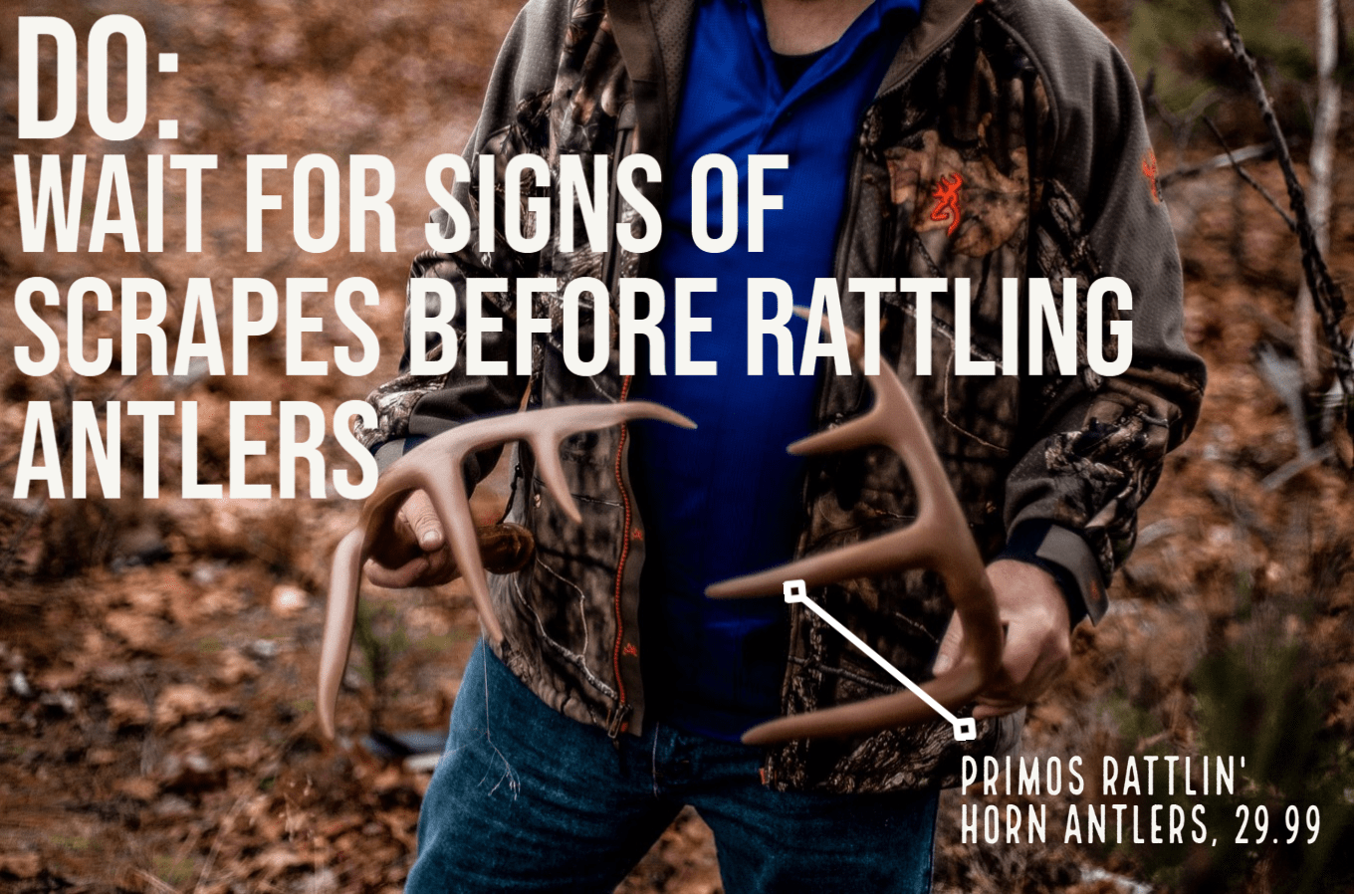 I like the Dominator call because you can slide between fawn, doe and buck.

Every deer sounds different, so you don’t want to do the same sound over and over. It sounds fake. So, I like the calls where you can change the tones.

If you plan on using rattle antlers wait until you start to see deer scrapes in the bush. They might do a hundred scrapes as they walk through their territory.

Big dominant bucks will leave scrapes sometimes six or eight feet wide. They’ll kick up dirt and leaves in larger scrapes to try and seem bigger. Then they urinate in it, and then they go to the next one.

By the time they go to the first one again, they check and see if a doe has urinated there. It’s just a big game.

They know if a doe is ready from her urine, and they’ll keep chasing and checking their scrapes to find an estrous doe.

Any advice or tips you can leave for a new hunter looking to start whitetail deer hunting?

Well, a lot of people start way too late. They see it on the shelves in the store, and think ‘ok, now [mid-summer] I should start feeding’ but I start to feed in the spring as soon as the snow is down enough.

That’s when you get the full benefit – young ones learn where the feed is. Plus the trace minerals keep leaching into the ground.

Even though they’re eating it, a lot is still soaking in. Even if you don’t put fresh stuff down there will still be traces of it. 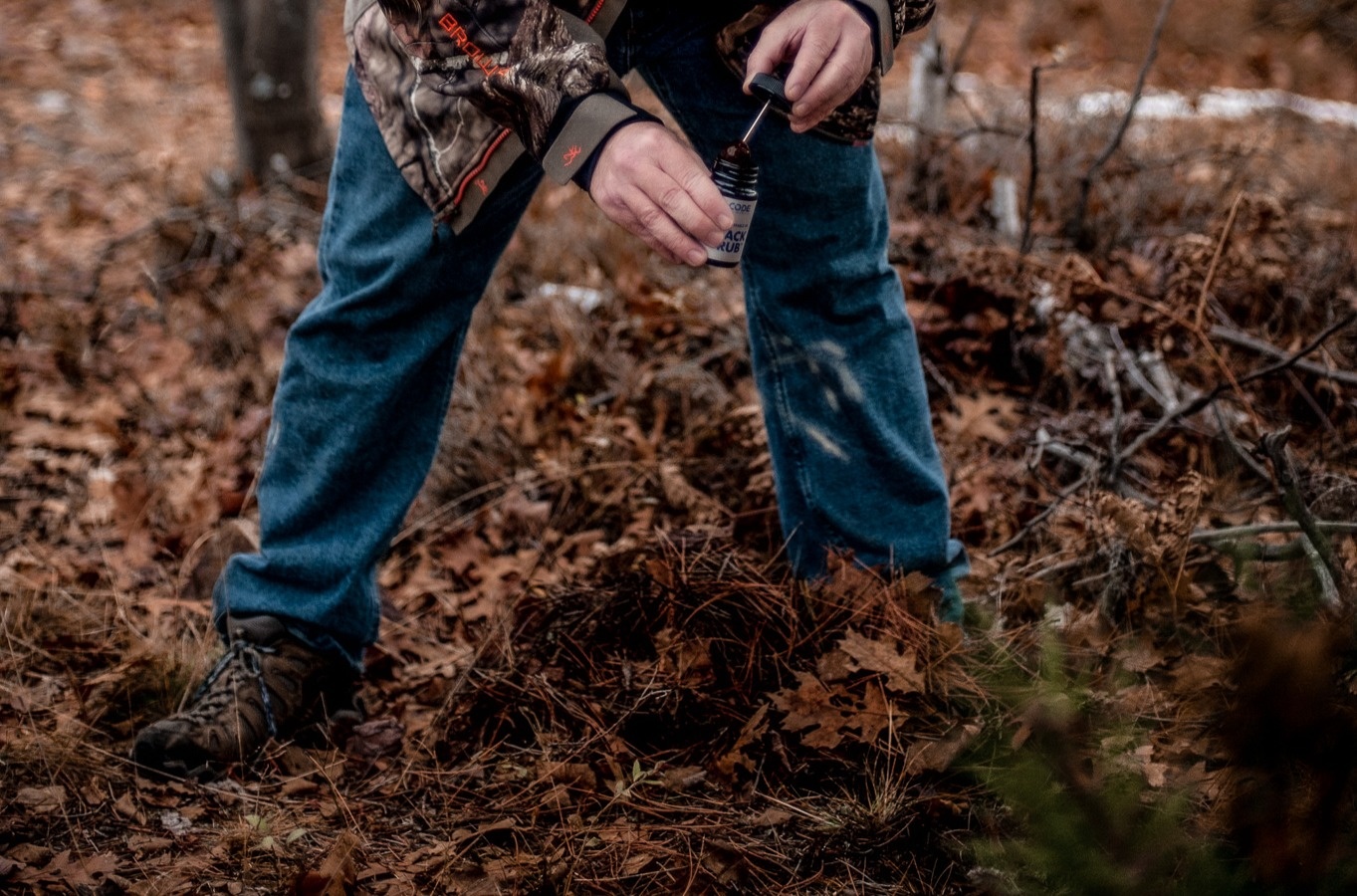 Nice bedding areas where they can be safe from predators. There should also be a water source nearby, so they don’t have to go far to drink.

Other food sources other than minerals are good too.