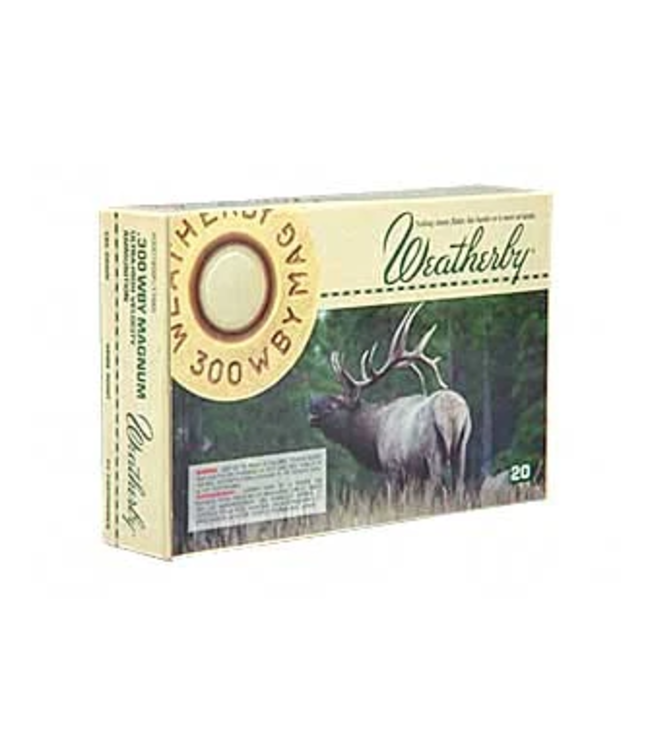 Over half a century ago, Roy Weatherby began his career in the firearms industry as a "wildcatter," developing his revolutionary ideas about rifle cartridge performance and design.

At the time, many of the industry's "experts" were promoting the idea t Read more..

All Ammo and Firearm sales are FINAL Sale. Federal Regulations state that firearms and ammo be shipped to the address on file with the Canadian Firearms Center. No Other Shipping address can be used. Ammo and/or firearms are considered oversize/overweight

Over half a century ago, Roy Weatherby began his career in the firearms industry as a "wildcatter," developing his revolutionary ideas about rifle cartridge performance and design.

At the time, many of the industry's "experts" were promoting the idea that optimum performance was a result of pushing big bullets at relatively slow speeds. Roy, however, believed just the opposite. It was his opinion that the faster a bullet traveled, the better-the flatter it would shoot, the less it would drop, the harder it would hit-the better its terminal performance. It was a concept that would spawn many an argument among ballistics experts, gun writers and in many a deer camp. But as people began to hear about and experience Roy's notion firsthand, those questions, concerns and doubts were quickly laid to rest. Soon, the entire hunting world would know what Roy had always believed-generate enough speed to create hydrostatic shock in the animal and the result will be more one-shot kills.

Today, Weatherby ammunition remains true to the concept Roy developed in the 1940s. At the same time, the ammunition also takes advantage of the latest in controlled expansion bullets which are capable of harnessing the higher velocities to create a cartridge that provides the ultimate in penetration, large wound channels and more one-shot kills.

All Weatherby® Mark V® rifles are guaranteed to shoot a 1 1/2" OR BETTER 3-shot group at 100 yards from a cold barrel when used with premium (non-Weatherby calibers) or Weatherby factory ammunition. Together, the Weatherby system (premium ammunition and Mark V rifle) forms the flattest shooting, hardest hitting, most accurate combination in the industry today.

Weatherby starts with Norma® Precision brass, the finest that money can buy (handloaders also tell us it's the finest for reloading). Then premium grade primers and bullets from the top names in the business-Hornady®, Nosler® and Barnes. The result is that each Weatherby Magnum cartridge is produced with the precision of handloading...with the blistering speed and downrange power to deliver the opportunity for more one-shot kills. In virtually every case, no other commercially-produced ammunition provides the Maximum Point Blank Range of Weatherby. Nothing shoots flatter, hits harder or is more accurate out of the box than a Weatherby.

0 stars based on 0 reviews